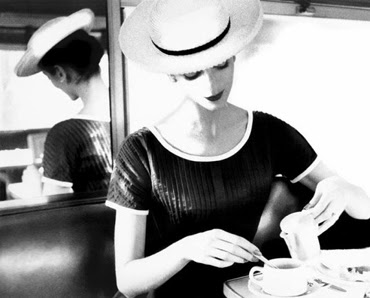 Carmen having tea - L. Bassman
Next Tuesday, November 19th, is Schubert’s death anniversary; as you all know, the apple of my eye. One year ago I gave you five reasons to love Schubert; today I would like to give you one more reason, a Lied that I've been leaving aside for months waiting for an opportunity like this. I didn't choose it because it was among my favourite, I’ve got dozens of favourite Schubert's songs; I did it because there's a word that comes to my mind every time I listen to it which is elegance. Schubert's music is not characterized by its lack of delicacy, but here I'm talking about… daring elegance.

I'll try to make myself understood by drawing a parallel with clothing. There is a kind of elegance which goes together with discretion. A black dress is a safe bet; of course, you could spoil your outfit by wearing shoddy, flashy accessories, but with a black dress is easier to look elegant, knowing that the worst scenario would be going unnoticed which is always better than attracting attention (here a statement of principles). But there's another more interesting way of being elegant, by being risky, which is something just a few chosen ones achieve. You might see that woman wearing a pretty strange combination of colours and you think that you would look like a clown; or maybe she's wearing a dress that being a bit shorter, or longer, or more transparent wouldn't be suitable at all, and still, she looks perfect, the most elegant woman in the gathering.

To me, Geheimes, D.719 (Secret) has this kind of elegance. Schubert wrote this Lied in 1821; the poem is included in the collection Östlicher West Divan (West-Eastern Divan), published by Goethe in 1819, it can be found in the third book, Buch der Liebe (Book of Love). The poem's title refers to a secret love: a woman is being observed by people around her. They have realized that there is a new light in her eyes and they wonder why. The reason is the poem's narrator, a man who, in turn, is observing the people.

When we listen to this Lied we hear in the lover's voice his happiness, his impatience, his inner delight... Those words are from Goethe, of course, but their support is Schubert's music and he highlights them here and there. Notice in the first stanza, for example, the pause after "Ich", and how he enjoys with the last verse, "weiss recht gut, was das bedeute" (I know very well what they mean), that's to say, "I know why her eyes sparkle and you don't", and he says half amused, half happy. And as the lover keeps on enjoying himself, please pay attention to the last verse, the promise to spend together die nächste süsse Stunde, “the next sweet hours". (By the way, can "sweet" be said in any other language in a sweeter way than in German?) The singer part is delightful, delicate and very elegant, its only risk is becoming oversweet instead of sweet.

The risky part is the piano accompaniment, which is made of repetitions of a very short motif (crochet, quaver, quaver rest) the whole song, except by five measures: the ends of the brief prelude, interlude between the first and second stanza and postlude, and the two final verses of the first and third stanza that I mentioned before. The rhythm is very steady but the dynamics change and the piano is now impatient, now mocking, now seductive, now dreamy ... the combination of such a delicate melody with such a unusual accompaniment is perfect, no matters how risky it is (let's just imagine that the singer and the pianist had a bad day, the former would look overacted and the latter wouldn’t go further than a mechanical touch).

I hope you like Geheimes performed by Hans Hotter and Gerald Moore. I really think it's gorgeous. I said before than Schubert's music highlights Goethe's words, but the performers are the vehicle that conveys them, and Hotter and Moore give us a fantastic whole collection of nuance.

Thank you so much, my dearest Franz Schubert!
Geheimes

Everyone is astonished
at the eyes my sweetheart makes;
but I, who understand,
know very well what they mean.

For they are saying: he is the one I love,
not this one or that one.
So, good people,
cease your wondering and your longing!

Indeed, she may well look about her
with a mightily powerful eye,
but she seeks only to give him a foretaste
of the next sweet hour.