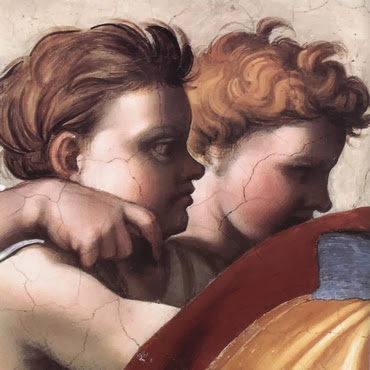 Capella Sixtina: Zacaries (fragment) - Miquel Àngel
This year 2014 we celebrate some of those round anniversaries, used to recall and also pay homage to their heroes. The one most related to this blog is Richard Strauss’ 150th birth anniversary, one of the regular composers on Liederabend. We'll also remember First World War 100th Anniversary, because such a deep wound had also a major impact on Europe’s musical life. And finally, one more anniversary to which this post is dedicated. It's related to MIchelangelo Buonarroti: next Tuesday 18th is his death 450th anniversary.

Michelangelo was an architect, a painter and a sculptor, but he was also a poet. It's said that he wrote poetry throughout his life, although only about three hundred poems (including sonnets, madrigals and rhymes) have been kept; most of which were written from 1529 when Michelangelo was in his fifties. Those poems were not published until 1863. Much earlier, in 1625, one of his great-nephews published some of them but he made some changes with a complete lack of judgment, the result was a completely careless edition. In 1900, William Wells Newell said regarding the poetry of Michelangelo in the introduction to his English translation of the sonnets and madrigals:
He worked on a sonnet or a madrigal in the same manner as on a statue, conceived with ardent imagination, undertaken with creative energy, pursued under the pressure of a superabundance of ideas, occasionally abandoned in dissatisfaction, but at other times elaborated to that final excellence which exceeds as well as includes all merits of the sketch, and, as he himself said, constitutes a rebirth of the idea into the realm of eternity.
Some months ago we listened to one of the Seven Sonnets of Michelangelo by Benjamin Britten, the Sonnet XXX, dedicated to his long time great friend, Tommaso Cavalieri. Today we are listening to one of the Hugo Wolf’s Lieder, again a sonnet and, probably, also dedicated to Tommaso Cavalieri, although the German translation refers to a Lady (Herrin) instead of the original poem Lord (Signor) (surprisingly, the English translation by Newell doesn't mention either a Lady or a Lord).

During Christmas 1896, a friend gave Wolf a volume of Michelangelo's poems translated to German by Heinrich Walter Robert-Tornow. The composer liked the poems so much that a large collection of Lieder was expected, according to his habit of reading a poet and then, composing, almost compulsively, one song after another until everything was fully said; as he had done previously with the twenty Lieder by Eichendorff, Goethe's fifty one or Mörike's twenty-two. But this time things turned out to be different.

1897 had a good start for Wolf. His friend Gustav Mahler was the Vienna Court Opera’s new conductor and promised him to premiere his opera Der Corregidor. Wolf's dream would be fulfilled at last! But Mahler wasn't be able to accomplish his promise during that season and they had to wait until the following one. That event utterly confused Wolf who had been suffering some health mental problems since he was very young. This suffering drove him definitely mad and he had to be institutionalized in a psychiatric hospital, where he remained until his death in 1902. Before then, Wolf wrote only three Michelangelos's Lieder which became his last work.

We are listening the 3rd Lied, performed by Hans Hotter and Gerald Moore, a great version . This is Michelangelo’s sonnet:

Some composers write their last songs when they are either very old or sick, and their work shows in one way or another their awareness of being running out of time. It's not Wolf’s case, but his last testimony excels.
Fühlt meine Seele das ersehnte Licht