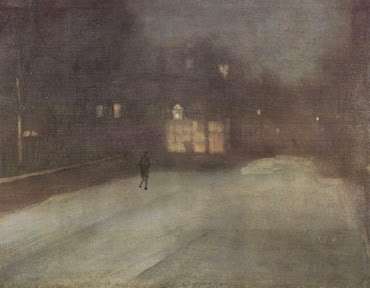 Nocturn en gris, or, neu a Chelsea - Whistler
For some weeks now, I have been listening to Winterreise in an intense and intensive way, because, within ten days, I have found three CD in my letterbox: two of them recently released, those of Jonas Kaufmann and Helmut Deutsch and Gerald Finley and Julius Drake, and one released two years ago, by Florian Boesch and Malcolm Martineau. It would be just natural to think that this post results from a possible overdose but it's not, it was scheduled on my blog's notebook a year ago, when the Gran Teatre del Liceu presented the 2012-2013 season. Because on 28th March, if everything goes to plan, Jonas Kaufmann and Helmut Deutsch will be performing Winterreise in Barcelona (it's not a coincidence, they are doing a tour).

Scholars say that he wanted to maintain the musical structure. He could have rewritten only some songs, but "these songs pleased him more than all the rest". More likely, his intuition told him that the twelve poems that he had already musicalized were a unit that was worth keeping; the wanderer's journey from his decision to leave (Gute Nacht) to his acceptance of solitude (Einsemkeit), is completely coherent. Schubert chose not to alter his first past and compose the second one by adding those twelve remaining songs in order. His only change was to swap no. 22 and no. 23; he put Mut! first and Die Nebensonnen after, probably to contrast his resolution in Mut! and the last song, Der Leiermann, by adding a new moment of weakness, or a new hallucination.

Now the important question is: do Schubert's Winterreise contents (the right column in the above table) lose coherence with regard to Müller's set of poems? I would say that the scholar's opinion is unanimous (at least, according to the scholars I've read): No, they don’t. The journey is an inner one, and inner journeys aren't usually lineal. In his fight against the inexorably fate, the young man wanders, falls, gets up, falls again; it's not essential for us to follow Müller's order to grasp his suffering, if the beginning and the end correspond exactly in both journeys.

I guess at this point, you are utterly confused with this mess of multiple versions, so I'll try to summarize the similarities and differences between both, Schubert's and Müller's last versions. The first five lieder are the same in both but Die Post follows in Müller's version. Then, the cycle resumes with three more lieder that are coincidental. Therefore, the first third of the cycle is almost identical in both cases. The most important difference is that those eight poems that follow in Müller's version (the more desperate moments) are almost at the end in Shubert’s; that's to say, Schubert's version is very similar to the one published in Deutsche Blättern, that he, funnily enough, never got to know.

Honestly, Müller's version is not easy for me, because when I found out about it, I had already listened to Winterreise enough times to internalize it. But, if you’d like to conduct an interesting experiment, take a CD and "mix" the songs to listen to them in Müller's order, as a kind of Julio Cortazar's Hopscotch.

To whet your appetite for the next recital, we are listening to Jonas Kaufmann and Helmut Deutsch performing one of the two last lieder that Müller wrote, Täuschung (Delusion). The wanderer follows a light until a warm, welcoming house, where people who love each other, live; everything he has lost and, even worse, he won't ever regain. And he sings this story with a delightful tune, without being able to hide his pain from us when he realizes that it has just been an illusion.
Täuschung

(Please visit this link if you need an English translation.)