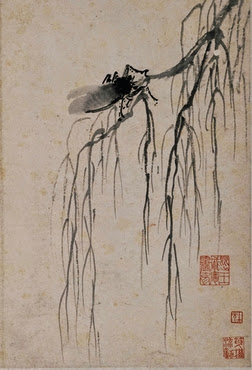 A crying cicada on an autumn willow - Shen Zhou
I’ve never heard of the expression "one-hit wonder" (used to describe a pop singer or a pop group known for a single success) applied to classical composers, but if that was the case, Emmanuel Chabrier would be a one-hit wonder. Because, what comes to your mind whenever you hear this name? "EspañabyChabrier", without pauses, as if it was a single word, and nothing else. The composer felt bad about being only known for that piece of work, as Maurice Ravel felt bad that his Boléro became so popular (he's not a one-hit wonder, but “BolérobyRavel” is also said without pauses).

Surely, Chabrier has more music than his famous rhapsody and today we're listening to one of his songs, included in our ten buggy songs list. He was born in 1841, so he is part of the first generation of mélodie composers, like Fauré and Duparc. He was very respected by his contemporaries because of his natural skill for melodies, his original, unmistakable harmonies and his funny and also affectionate sense of humor. A good example of his sense of humor are the four "zoological” romances; As soon as you read the titles you are eager to listen to them: Ballade des gros dindons and Pastorale des cochons roses, with poems by Edmond Ronstand (the author of Cyrano de Bergerac) and Villanelle des petits canards and Les cigales with poems by Rosemonde Gérard. The four songs were published in 1890 as part of Six Melodies, the last compilation published by Chabrier; Debussy described them as “masterpieces of great fantasy” and Poulenc and Ravel was inspired by them to write their Histoires naturelles and Bestiaire; we'll soon talk about both works as there is a song from every cycle in our buggy list.

Today we're not talking about turkeys, ducks or pigs, we're talking about cicadas. The poem Les cigales was written by Rosemonde Gérard and belongs to her collection Les pipeaux, published in 1889, when she was twenty-three. The book was highly appreciated by critics and became a success, but Gérard didn't publish any other one until 1926, when she was a widow, because she had married Edmond Ronstand in 1890 and had put her talent at her husband’s service (some people would say that she was his muse; some others that his muse often rewrote his texts).

Rosemonde Gérard structured her poem in three parts, each part with three stanzas, the last of which is a refrain. Chabrier kept this structure, separating each part (which refers to a different time of the day) with a piano interlude and emphasizing the refrain with (this is a warning) a catchy tune; you can spend the whole day humming "les cigales, ces bestioles...". And the cicadas, where do we hear them? As you can imagine, in the piano, with arpeggiated chords that imitate the cicada singing.

As the sun climbs higher and higher,
patches of shade keep shrinking
and noise multiplies on every side:
it is noon, summer noon is singing!

Directed by the blazing star
is a chorus, who have rehearsed their parts,
broadcasting a raucous cantata
with resolute and tireless hearts.

They overdo it, the cicadas;
they indulgently wallow
in among the old olive-trees
and the flowers of the dusty hollow.

Enchanted with their power to sing,
they press on with their crazy musicking.
Through the branches and browning grasses
their unremitting song takes wing.

And since for the work-weary peasants
the abundant sun of summer
in ample waves from high above
pours the magic potion of slumber,

all is still, to mark this special hour...
except for these fanatics
filling in the spaces between
the chimes of the distant church tower!