The ring on the King's table 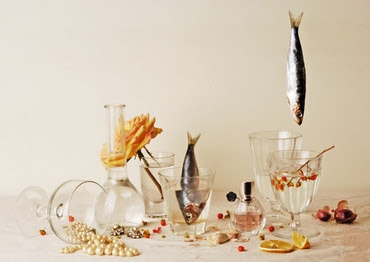 Diving fish - Dale Grant
Do you like tales? I do, very much. One of my favorite stories when I was a child was about a Princess whose father wanted to marry her with an old, solemn and boring Minister. The princess couldn't refuse him so she requested, as a pledge of love, a dress made of moonlight shafts which fit into half a nutshell; she was sure the Minister wouldn’t be able to get it. However, a few days later, the Princess had her dress so she demanded a second pledge of love: a dress made of sunlight shafts that that fit into half nutshell. When the Minister gave her the dress she had required, the Princess, then, made her last attempt: she wanted a cape made of a skin strip of each animal to be found in the Kingdom. As you can imagine, the Minister went back with the cape. The Princess didn't want to marry him by any means so that night, she covered herself with her new cape and fled the palace; she only took a nutshell where she put the two dresses, a gold spindle and a gold ring (I was fascinated by those dresses made of sunlight and moonlight, with a such thin fabric!).

This return to childhood comes in handy because Rheinlegendchen, the Lied by Mahler we're listening this week, is also a tale that shares something with the one I told you. The song narrator, a peasant girl, misses her beloved who is at the King's service. The girl has a ring and thinks of throwing it into the river: the ring will reach the sea, it will be swallowed by a fish, the fish will be served on the king’s table, the King will find the ring, the beloved will recognize the ring and eventually, will return it to the girl. Do you think that is a complicated strategy? Stranger things happen. The element that ties both stories is the ring; the Princess also uses hers to draw the King's attention. However, she doesn't leave anything to chance and puts the ring in a cake she is making for the King for him to find.

In her book Erinnerungen an Gustav Mahler, Natalie Bauer-Lechner explains she always wanted to know how Mahler composed and he got impatient because it was so difficult to explain. Thanks to the curiosity of Frau Bauer-Lechner, we know now how Rheinegendchen was composed:

"Today, for instance, I had a theme in mind; I was leafing through a book, and soon came upon the lines of a charming song that would fit my rhythm. I called the piece Tanzreime (he later called it Rheinlegendchen), although I could christen it along with a group of other songs, or perhaps with Um schlimme Kinder artig zu machen. But this is very different in form from the early songs I wrote for Frau Weber's children. It is much more direct, but whimsically childlike and tender in a way you have never heard before. Even the orchestration is sweet and sunny, - nothing but butterfly colors. But, in spite of all its simplicity and folklike quality, the whole thing is extremely original, especially in its harmonization; so that people will not know what to make of it, and will call it mannered. And yet it is the more natural thing in the world, it is simply what melody demandes. " (translation by Dika Newlin)
When Mahler says "today", he's referring to 9th August 1893 and “the book” is, of course, Das Knaben Wunderhorn; Rheinlegendchen finally became part of Fünfzehn Lieder, Humoresken and Balladen. The other song that he mentions, Um schlimme Kinder artig zu machen (which was dedicated to the children of his good friend, Marion Weber) belongs to the first collection of Wunderhorn Lieder he wrote, Gesänge und Lieder aus der Jugendzeit. Remember that the first collection are songs for voice and piano while the second has two versions, with piano and orchestral accompaniment; as shown by the comments of the composer, the Rheinlegendchen orchestral version was composed first.

Nobody better than the composer can explain his work so I won't add anything else... I'm glad to say that Mahler was wrong about the audience reaction, Rheinlegendchen is one of the most loved Wunderhorn Lieder since the day it was premiered: that day, they loved it so much that it was given as an encore. Honestly, it doesn't surprises me at all. The temporary title that Mahler gave to the song emphasized the dance character of the song, the ländler he used so often, but despite being a folklike song, as he says, its sophistication reminds us of the ländler’s urban kin, the Viennese waltz. It's indeed a very special Lied.