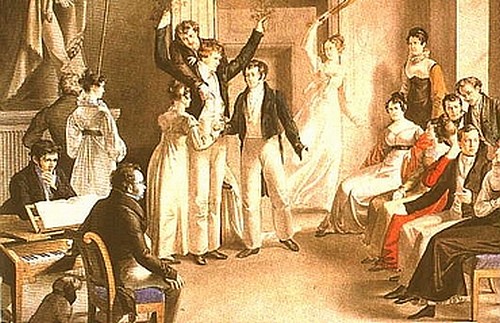 Charade in Atzenbrugg - L. Kupelwieser
I’d say that Franz Shubert was a good person. Not because of his music, it’s perfectly possible to be a wonderful artist and also a dreadful person, but because of his friends. That shy man of few words was much loved while alive and tenderly recalled after his death by a big number of friends; I think that someone who establishes such strong and lasting relationships is necessarily a good man. Call me naive.

Schubert made friends other than his family acquaintances, when he enrolled in the Stadtkonvikt, the boarding school where he studied, in October 1808. This group eventually spread and formed what is now known as his circle. The circle, of course, was not closed (and this makes me think that circle is not the best way to call it) and many things happened in twenty years: people changed, got angry, moved to other places... The degree of intimacy wasn't either the same among the members but all of them were linked to Schubert and History definitely brought them together. Some people were his age, younger and older; some people from wealthy families and people without money, respectable men or aspiring artists; in short, very different people with one thing in common, their love for art, because our Franz understood friendship as sharing knowledge and his love of beauty. It's said that when he met someone, he always wanted to know if he was a musician, a writer or a painter and he used to ask his friends: Kann er was? (What can he do?).

Today, I would like to talk about some members of this circle; Every year, the week after the anniversary of Franz Schubert’s death, November 19th, I dedicate the post to the apple of my eye and this year, I'm paying homage to him through his friends. As I was writing along, I realised that the post would be too long so I divided it into two parts. Next week, we'll have the second part. Even so, the posts are a bit longer than usual so please, bear with me as you did last week.

Schubert was eleven when he entered his boarding school; Joseph von Spaun was nineteen and it was his last year there. They met because both of them were second violins in the school orchestra and shared the stand; Spaun, a passionate musician, immediately realized that the boy had something special and "adopted" him. He was Schubert's first friend, the most faithful and one of the most important people in his life. Spaun belonged to a wealthy family; he became a government official and eventually was appointed baron. As you can imagine, he had many acquaintances and always brought Schubert into contact with people that could help him. That intimate relationship between Spaun and Schubert leaved us the song Der Jüngling und der Tod, Spaun's response to Der Tod und das Mädchen.

One of those people that Spaun introduced to Franz was his friend Johann Mayrhofer, a philosophy and theology student first (I'm starting to think that all poets studied those degrees) and a law student later. In the summer of 1814, Spaun sent Schubert a poem by Mayrhofer, that became one of his first Lieder, Am See; shortly after, he introduced them and the love of poetry and music did the rest, they were inseparable for a long time. Mayrhofer, an extremely sensitive man and, as everybody else in Schubert’s circle, a defender of intellectual freedom, held an incongruous position as an imperial censor; things were hard in Metternich's Vienna. Censor at day, artist at night, he is the poet with more musicalized poems by Schubert after Goethe; he wrote about fifty lieder, two of which we heard previously, Abendlied and the wonderful Nachtstück.

Franz von Schober and Schubert were soul mates, to the extent that they were known as "the Schobert". Schober was a year older than Schubert and also was at Konvikt but they didn't met there, Spaun introduced them in Spring 1815. According to all the descriptions I've read, Schober was a charming young man, with excellent education, smart, sophisticated, generous, and, considering the portrait by Leopold Kupelwieser (also friends with Schubert), very attractive. He was able to make a living without working so he devoted himself to arts, despite having studied law: he was a writer, a painter, and even (what a scandal!) an actor. Schober's mother accepted Schubert at home at the end of 1815 (accepted meaning that she maintained him like another son) and the composer was able to quit his teacher position and to devote himself to composition. Some of the poems by Schober became songs; no doubt that the most famous is the one that opened this blog (and many others, it is a hymn), An die Musik.

The first opera that Schubert attended was Iphigénie en Tauride; he went with Spaun in 1813 and he was the happiest boy in the world. That night, the famous Johann Michael Vogl sang; years later, the bariton became one of Schubert’s greatest admirers. It was hard for Spaun, Schober and the other friends to persuade Vogl to listen to the songs of their friend (that was at the beginning of 1817). The first time, he wasn't too impressed, but eventually he came into Schubert's world and became, according to Spaun, "his first admirer." It was also the first professional singer who performed his Lieder and he set a trend (today we would probably get shocked by his too operatic performances, but he was the first one!).

Josef von Spaun said that Vogl was moved by Lied eines Schiffers an die Dioskuren (Sailor's song to the Dioscuri), he said that "it was a magnificent lied and it was inconceivable such depth and maturity from such a young man." This song was written in 1816 from a poem by Johann Mayrhofer; it's just perfect to musically illustrate this first part of the post. Listen to it (in the also magnificent version of Fritz Wunderlich and Hubert Giesen) and tell me if Vogl was not absolutely right.

Next week we will continue talking about Schubert's friends.
Lied eines Schiffers an die Dioskuren

Dioscuri, twin stars
that shine upon my skiff,
you comfort me on the ocean
with your mildness and your watchfulness.

He who firmly believes in himself
and unswervingly meets the storm
feels himself, in your light,
doubly courageous and blessed.

This oar that I brandish
to part the ocean waves,
I shall hang, once I am safe on land,
up on your temple's pillars,