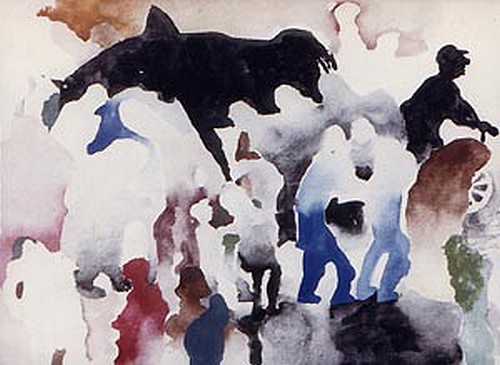 (untitled, 1944) - Friedl Dicker-Brandeis (Vienna, 1988 - Auschwitz, 1944)
Terezín is a town in the Czech Republic, infamous for the Nazi concentration camp which was set there between November 1941 and May 8th, 1945; Camp figures vary according to the sources but there are chilling ones in any case. The Terezín Memorial website indicates that there were about 140,000 prisoners; Terezín was not an extermination camp but the living conditions were so harsh that 35,000 people died (hereafter where it says "died" please read "were murdered"). When the Soviet army liberated the camp there were only 19,000 survivors; during the previous months, 87,000 people were deported to Auschwitz to be executed and only 3800 among them survived. The Terezín camp was kind of "special" to the Nazis, who wanted to present it as an example of their beneficial influence on the Jews. Their cynicism came to such an extent that they organized a visit for the Red Cross on 23th June 1944. The members of that organization attended a performance which simulated the peaceful life at the concentration camp, with families who lived and worked in fairly reasonable conditions and spoke well of the Nazis. I wonder how the report of the Red Cross was, if those experts were able to go beyond that masquerade and read on their eyes and abused bodies, the horror they lived.

Among the many lies that the Nazis showed to the world, there was a really true thing: there was some cultural life in Terezín. Not because of the Nazis, but because the decision of the prisoners. There were many intellectuals, musicians, writers or painters in the camp who were able to create in their living hell. For themselves, for dignity, and for their children... because there were many children in Terezín, about 15,000, of whom only around 1600 survived. Some of the music created in that camp, in different styles, was recovered, at least, in three recordings: Terezín: the Music 1941-1944, released in 1991; Terezin-Theresienstadt, released in 2007 and Spiritual Resistance: Music from Theresienstadt, released in 2008. The second one, instigated by Anne Sofie von Otter, has gone from notebook to notebook for four years because I didn't have the courage to write the post I'm writing now, maybe because I don't like what's happening in Europe. These are the names of the composers included in these three discs: Adolf Strauss, Carlo Taube, Erwin Schulhoff (who was not in Terezín but in Wülzburg, where he died), Hans Krása, Ilse Weber, Karel Svenk, Martin Roman, Pavel Haas, Viktor Ullmann, Karel Berman, Zikmund Schul and Gideon Klein. The only survivors of this list were Karel Berman and Martin Roman.

I said that the recording Terezín was Anne Sofie von Otter's project, who also involved pianist Bengt Forsberg and other performers as baritone Christian Gerhaher and guitar player Bebe Risenfors, who accompanies Von Otter at the song we're listening today. The story behind the recording is as moving as the recording itself; I'm summarizing what the singer told Normal Lebrecht, you can read the whole article here. Göran von Otter, Anne Sofie's father, was a Swedish diplomat assigned to Germany during the war. During a train journey in 1942, he and an SS officer went to have a cigarette and stretch their legs during a stop. When Kurt Gernstein, the officer, realized that his interlocutor was Swedish, he expressed his need to tell him something. And for hours he talked about gas chambers, common graves and the ten thousand people who had been killed that day. He gave names and details and implored the diplomat to inform the Swedish government. Von Otter reported to his superiors but the document disappeared, maybe because Sweden was a neutral country in that war.

Gernstein kept on explaining to all foreigners he met what was going on and eventually, surrended to the French in April 1945. He was accused of war crimes and imprisoned; Von Otter was requested to confirm that Gernstein had been exposing the situation for years but before the confirmation arrived, the officer was found dead. Just one more thing about Gernstein: He joined the SS to investigate the death by euthanasia of his sister in law, who suffered from a mental illness. With regard to Göran von Otter, he struggled with depression the rest of his life due to those incidents.

At first, I thought of sharing in this post one of Pavel Haas’ songs, but finally, I'm sharing the best-known song from the album, Wiegala. Wiegala is a lullaby composed by Ilse Weber, a writer who was in Terezin with her husband and their son, Tomas. They managed to save their eldest son life, Hánus, by sending him abroad. Ilse worked as a nurse at the camp and wrote poems and songs to distract the weakest: children and old people. Ilse and Tomas were deported to Auschwitz, where they were executed along with other children from Terezín. Witnesses explained later that Ilse volunteered to the gas chamber because she didn't want to leave their children and that she sang Wiegala to them on the way. Willi, Ilse's husband, survived; years later he published the poems that Ilse wrote for Hánus, In Dein Mauern wohnt das Leiden.

I wonder if those parents who nowadays are fleeing war, travelling around thousands of kilometers driven by despair, risking their lives in search of an uncertain future, also sing lullabies to their children. I bet they do it.
Wiegala