C is for contemporary 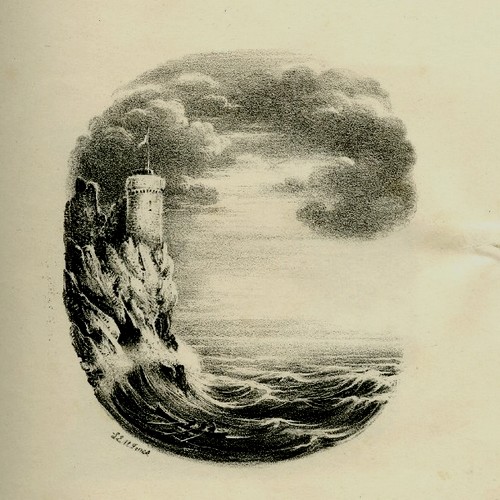 The Landscape Alphabet - C. J. Hullmandel (British Museum)
A was for amor, it couldn't be otherwise, how many songs on Liederabend don't speak of love? B was, naturally, for baritone (and baritonophilia). C is for contemporary as an answer to a common question: Do people still write Art Songs? And my answer is: sure they do! Not as frequently as in the nineteenth century, of course, but people still write songs. Today, we're listening to a beautiful one, a love song sung by a baritone. Some things never change.

Over the past four years, we’ve listened to Ai ondas que eu vin veer (2012), by Eduardo Soutullo; Dark House (2011) by Jonathan Dove; Das Paradies (1999) by Hans Werner Henze or On a echoing road (1998) by Ned Rorem. I think there is little doubt that all of them are contemporary songs. However, how old should a work be so as we can use that adjective? I wasn't able to find a clear answer to this question; many sources consider "contemporary music" the music written since the end of the Word War II onwards and I just kept this definition because this date is important when talking of Art Song.

Art song ended, for some people, with Richard Strauss' Vier letzte Lieder, written in 1948 (as well as for other people, the last opera was Turandot, written in 1924) and the truth is that there are few songs after this date, either in recitals or on this webpage. On one side, it's reasonable because Art Song is a genre of Romantic music and most of the corpus was written in the 19th century. On the other hand, we can't ignore the songs of those composers who went into exile during the war, as Eisler and Korngold; the composers who wrote their firsts songs at that time, as Britten, or a bit later as Mompou, Montsalvatge or Walton, or those mentioned at the beginning. C is for contemporary because I wanted to focus on all the "post-Strauss" songs that I love even though Schubert is, as you well know, the apple of my eyes.

Today we're listening to one of the greatest 20th century musicians: Leonard Bernstein. Do you remember La bonne cuisine, a cycle of four songs whose texts were recipes? This funny cycle and some others were written in the forties; he wrote his next song cycle thirty years later, a work commissioned to celebrate the American Bicentennial Year in 1976. It wasn't ready on time and was finally released in October 1977, although some songs had been performed several months earlier. Songfest is a twelve songs cycle for six singers and orchestra with which Bernstein wanted to draw an unusual picture of the American society throughout their three hundred years of history. He chose thirteen poems by thirteen writers who, in one way or another, really push the boundaries. From Anne Bradstreet, who arrived at New England in 1630, to his contemporaries as June Jordan or Gregory Corso. Walt Whitman, about whom we spoke some months ago, is also among those writers.
Bernstein chose a poem by Whitman, To what you said, that very few people knew about because it had been found by chance in the manuscript of one of his works, Democratic Vistas, only a few years earlier; Whitman, like so many people, used to reuse paper. We don't know for sure when he wrote this poem; one theory claims that it was part of Calamus and wasn't published because it was too explicit. This theory has two weaknesses: first, there are many more explicit poems in Calamus; second, Calamus and Democratic Vistas are ten years apart and people don't usually keep paper for so long before to reuse it. Another theory says that it was the other way round: To what you said was written on a reused sheet of Democratic Vistas and therefore it's after 1871. This theory fits another hypothesis, that the poem was addressed to the writer Anne Gilchrist; the two of them finally met after many years of epistolary relationship and the writer could have given her the brush-off with that poem. If that was the case, Whitman would have been considerate enough as not to publish it, since Mrs. Gilchrist didn't need to be recognized on those verses by their common acquaintances. If you enjoy stories about lost pieces of writing as much as I do, I recommend that you read the article A Study of the Text and Music for Whitman's "To What You Said", written by Thomas Hampson and Carla Maria Verdino-Süllwold in 1995.

Whitman's poem is both direct and delicate, and Bernstein wrote a beautiful, melancholy song. In the first version of the cycle, the orchestral one, that song was sung by a bass; just after the release, the composer published the version with piano accompaniment that we're listening today, performed by Thomas Hampson and Craig Rutenberg.
To what you said
To what you said, passionately clasping my hand, this is my answer:
Though you have strayed hither, for my sake, you can never belong to me,
Nor I to you,
Behold the customary loves and friendships the cold guards
l am that rough and simple person
l am he who kisses his comrade lightly on the lips at parting,
And l am one who is kissed in return,
I introduce that new American salute
Behold love choked, correct, polite, always suspicious
Behold the received models of the parlors --
What are they to me?
What to these young men that travel with me?
Twitter