Second post of the series written by the students of the Master in Lied of the ESMUC, their work for the module Genre Literature. Repertoire of the German Lied, and it is given by pianist Viviana Salisi. We started the series last week with a gorgeous song chosen by Elena Mateo and this week we'll listen to a gorgeous song too, chosen by Guillem Martí: Mein schöner Stern, by Robert Schumann, performed by Dietrich Fischer-Dieskau and Jörg Demus. Thank you very much, Guillem! 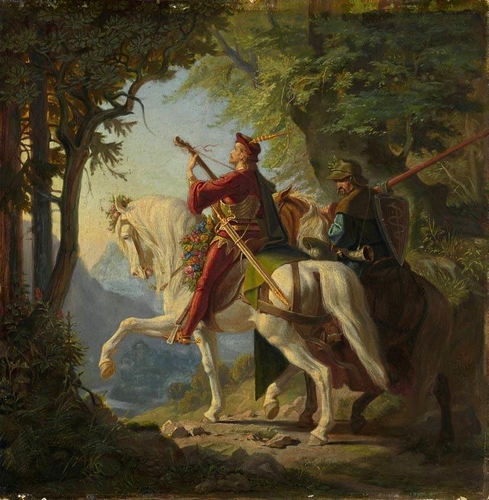 Minnesänger with his squire - A. Kraus


Mein schöner Stern, op. 101 n. 4, by Robert Schumann, is part of the Minnespiel op.101, a cycle based on poems by Friedrich Rückert that, like Spanisches Liederspiel, combines Lieder for vocal soloists with duets and two quartets. Two of the texts had previously been used by Schumann for the cycle Zwölf Gedichte by Friedrich Rückerts Liebesfrühling op. 37, with songs from both Clara and Robert Schumann. Specifically, there are the texts that, in this case, the composer uses for the quartets of this cycle: Schön ist das Fest des Lenzes and So war die Sonne scheinet. The latter, one of the most played lyrics by Rückert, closes so the op.37 cycle as well Minnespiel op. 101

The title of the cycle, Minnespiel, could refer to the medieval tradition of the Minnesänger, the Germanic equivalent of the XII-XIV centuries to troubadours and French trouvères. The keyword, Minne, is translated by "love", but we should point out that we refer to the courtly or chivalrous love that characterized the medieval lyric. It does not seem that the title has been extracted from the Liebesfrühling, the book by Rückert in which the chosen poems appear. So that Schumann has chosen the word Minne instead of the most frequent Liebe or that he has changed the Liederspiel of opus 74 by the Minnespiel of this opus, it seems significant: it is a reference to a vision of the oldest, most idealized love, as pure as possible.

Here, however, the medieval references end. Already from the first agreement of Mein schöner Stern, we feel the yearning spirit of the purest romanticism and the time when Schumann composed them. This work is, therefore, a contemporary of cycles such as Opus 90 on texts by Lenau or Op. 98 about Wilhelm Meister as well as the Third symphony or the Fantasiastücke for clarinet and piano. From that cycle, this Lied is probably the one that is most often interpreted separately. I remember when I heard it for the first time: how could I sit down to the piano to read its agreements and how I found inspirational, fascinating and unique music. In fact, this was one of the first Lieder I knew closely and, despite later I heard other Schumann wonders that could point in the same direction (Du bist wie eine Blume, Mondnacht and others), this Mein schöner Stern has seemed me a unique song that is born from an inspiration close to despair, perhaps to madness, but at the same time is able to show the calm that the poet yearns for.

Behind the poem of Rückert it seems as if there is a declaration of intentions: not to renounce the ideal. Although we assume what bursts (Dampf) our spirit, we trust that keeping in mind that we have idealized transfigures these shadows into light. The poet does not want to lower the ideal so as to reduce the yearning. Just pretend that this yearning is calmed when it comes to the ideal: the star does not have to descend to the earth, but it must rise to us to the sky. Es war, als Hätt 'der Himmel, die Erde still geküß ("it was as if the sky had quietly kissed the earth") says Eichendorff in Mondnacht. Was this insistence, this desire not to abandon the ideal, which brought Schumann to madness?

From the first painful ninth accord to the rest of the plagal cadence of the end, all the development of the piano accompaniment perfectly illustrates the transfiguration of which the poem speaks, especially through the chaining of accords that in more than a moment they can remember jazz, and they bring the listener to unexpected sensations.

And the night. The night in which the romantic poet finds himself alone in front of nature and the mystery of life. The night that seems to require these repeated notes (remember Strauss’s Die Nacht or, again, Schumann’s Mondnacht) and the sound of the horn... why, is not the horn what is being heard from the third compass, answering the voice?
Mein schöner Stern