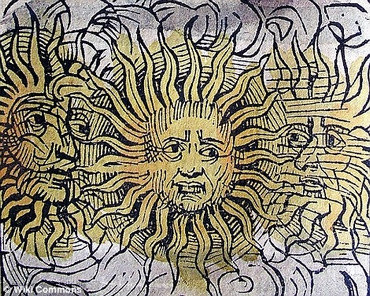 Parhelis (woodcut from tbe Nuremberg Chronicle) - M. Wolgemut
When I write posts about the songs in a particular cycle, I don't usually follow their order. The only ones I could still complete in order are Dichterliebe and Frauenliebe und -leben, and that's because I've shared just two songs of each one (mental note: we have been more than three years without listening to a song from Dichterliebe!). Nor do I begin a cycle in order to finish it, as I do with the series. I choose its songs according to the same sometimes-inexplicable impulses that make me choose any other song. In the case of Winterreise, they can be explained: the five lieder we've heard so far resulted from a friend’s gift, a guest post (which is also a gift from a friend) or of a overexposure to this cycle. Today we're listening to the sixth one thanks to TV.

About a month ago, I was checking the weather forecast when a mock sun picture was shown; it seems that the weather conditions were right because I saw many pictures of mock suns during those days. No matter what we know about the physics explanation (the diffraction when the sunlight strikes on the ice crystals that form the cirrus clouds), the phenomenon still draws our attention because if circumstances arise, we’ll see two copies of the sun, more or less clearly, on each side of the real sun. When people hear the words "mock sun", they would normally think of that image, the three suns, but some of us get off that norm and when we hear "mock sun" we also hear a song from Winterreise. After having met those words so many times in a few days, it became just inevitable to talk about Müller and Schubert's Mock suns.

Die Nebensonnen is the twenty-third and next-to-last song of Winterreise and, somehow, it's the end of the wanderer's journey. What comes next, no matter how we understand it, is a consequence of this song, especially of its last verse. The wanderer, who had already seen will-o'-wisps and mirages during his journey (in early 19th century, the explanation of those phenomena was unknow for most people so they became fascinating and mysterious, so romantic), sees three suns in the sky. He stares at them and realizes they stare at him, too. It's not easy to stare at the sun, is it? Certainly it's winter and a little bit cloudy, the only way to see mock suns, but I still think that a man staring at the sun is a pretty disturbing image. Not to mention the sun staring at you. This is what happens in the first four verses of the poem and Schubert describes it with music, half solemn and half hypnotic; In the following four verses, the wanderer rejects the three suns. Schubert clearly shows that refusal and the sour pain of a man who once had three suns and but lost the two best. What is their meaning? There are many interpretations more or less philosophical but the more direct interpretation says that the two false suns are his beloved's eyes, which turned to be false too; the third sun, in this case, would be the real one. In the last two verses, when Schubert's music changes again and goes to the beginning, the wanderer renounces the sun. Don't you think that renouncing the sun, it is like giving up definitely to everything?

I suggest you listen to Die Nebensonnen in the performance of Peter Pears and Benjamin Britten. We all know that cycles should be listened completely; one disadvantages of listening to isolated songs, as we're doing today, is we lose the context. If you already know Winterreise you have that context; if not, maybe you could listen, after listening to Die Nebensonnen, to the end of the cycle. Let's say the last four songs, from Das Wirtshaus (in that great version or any other one). I would like that after reading this post, next time you listen to Winterreise, you pay special attention to Die Nebensonnen; it's a song that sometimes goes unnoticed, maybe because it comes after the energetic Mut! or because we anticipate the last one, Der Leiermann. It's true that the cycle has twenty-four songs and it's so powerful that at some point, we should allow ourselves to keep some distance. But the last verse, especially depending on how the singer focuses his journey, is one of the most devastating in a cycle full of devastating verses: Im Dunkeln wird mir wohlen sein (I should feel happier in the dark).
Die Nebensonnen
Drei Sonnen sah ich am Himmel steh’n,
Hab’ lang und fest sie angeseh’n;
Und sie auch standen da so stier,
Als könnten sie nicht weg von mir.
Ach, meine Sonnen seid ihr nicht!
Schaut Andren doch ins Angesicht!
Ja, neulich hatt’ ich auch wohl drei;
Nun sind hinab die besten zwei.
Ging nur die dritt’ erst hinterdrein!
Im Dunkeln wird mir wohler sein.
If you need an English translation please visit this link

A song of despair

A new journey in our Winterreise. Today, Erstarrung, with Hans Hotter and Gerald Moore.

Ladies that sing songs for gentlemen

We are in the middle of June and what we could call our "regular season" is about to finish; except for unforeseen events, July will belong to the students of the Master's Degree of Lied-ESMUC and, ...

The music we love 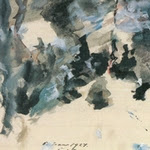 A couple of weeks ago a reader commented about a lied that it was one of his favorite pieces of music and every time he listened to a new version, he discovered new nuances. A few days ago, I watch...
Twitter