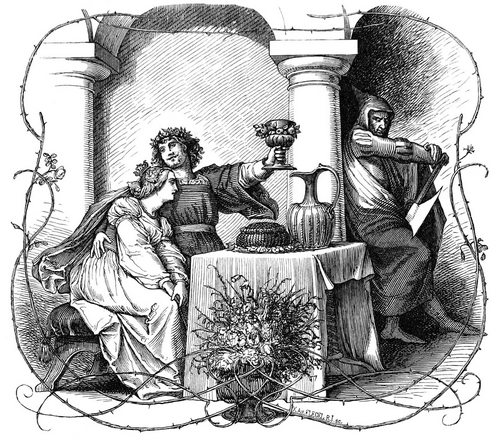 Knight Olaf (illustration from Deutsches Balladenbuch)- A. Ehrhardt
The King and the executioner are waiting, in front of the Cathedral, for the wedding of the King's daughter and knight Olaf to end, to execute the groom. The knight, smiling, asks the king to grant him some more time, until midnight; he would like to celebrate the wedding. The hours pass by; the Knight has his last drink and dance for the last time with his wife, while the executioner is waiting at the door. And midnight arrives.

Heinrich Heine tells this terrible story in his ballad Ritter Olaf, written in 1839. As other two previous ballads, Erlkönig by Goethe (1772) and Erlkönigs Tochter by Herder (1778), it was probably inspired, although vaguely, by an old Norse legend; those legends were a source of inspiration to German poets for decades. In fact, the three ballads share some elements. In Herder's poem (musicalized by Carl Loewe), a knight also named Olaf rides through the forest at night, on his way to his wedding; he runs into the daughter of the king of the elves, who asked him to dance with her. Olaf refuses to do so and rejects the treasures offered by the elf; she doesn't take a no for an answer and strikes him in his heart. The following day, the wedding day, the bride finds him dead in bed. In Erlkönig we also find someone riding through the forest at night, a father with his son, and we also meet the capricious daughter of the king of the elves. Knight Olaf dies on his wedding day, having danced, of course, with his wife.

Heine explains Knight Olaf's fate very briefly. A few words are enough to imagine the king's daughter almost died in despair, the impassive King, Olaf celebrating his last minutes of life and the silent executioner always there. We won't know until the last verses why the knight has been sentenced to death; as you could imagine, we're talking of a Liebestod, a love death, which Romanticism people liked even more than medieval legends; the Knight has broken the rules out of love and his punishment will be death. I wonder which punishment the king has thought for his daughter, maybe he thinks that to become a widow in her wedding day is enough. That story needs a song, and I wonder why there are so few!

The best-known song, and not that much, is by Felix Draeseke, a composer who lived between 1835 and 1913. He was highly regarded in his time and the years after his death, Liszt called it a "giant", but after World War II he was practically forgotten. His work includes around one hundred Lieder; Ritter Olaf, op. 19, composed in 1881, is a short cycle of three songs, corresponding to the three parts of Heine's poem. We're listening to the third one, that begins at midnight. Knight Olaf gets up to the scaffold and, smiling, bless all the beautiful things that there are in the world, including the violet eyes of his wife and the elder tree that sheltered their love. Somehow as Mario Caravadossi in E lucevan le stelle, but without his desperation. By the way, some time ago, I read that when Tosca was premiered, that aria was a scandal, because the convict's last words were supposed to entrust his soul to God, not to enjoy the memories of his sinful acts. Was Heine trying to scandalize his contemporaries with those final verses?

Lord Olaf, it is midnight now,
Thy latest hour draws nigh!
For thou the daughter of a king
Hast loved unlawfully.

The monks intone a funeral psalm,
And see the headsman stand,
Red-coated, by the grim dark block,
With glitt'ring axe in hand.

Now in the court, where gleaming swords
And torches flash, his place
Lord Olaf takes; his red lips smile,
He speaks with smiling face:

"I bless the sun, I bless the moon,
And stars, the heavens that throng;
The merry birds, I bless them too,
That fill the air with song.

"I bless the sea, I bless the land,
And all the flowers I bless,
The violets most -- my wife's dear eyes
They match for tenderness.

"Ah wife, those violet-eyes of thine!
Though now my death they be,
I bless the elder-tree where first
Thou gavest thyself to me."