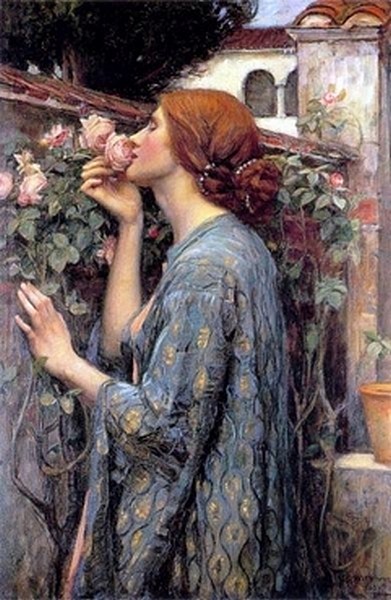 The soul of the rose - J. W. Waterhouse
Tomorrow is Saint George's Day; you would expect a post with a rose, wouldn’t you? After Strauss, Quilter and Haydn, in this occasion, our rose is a Lied by Schumann, Meine Rose. It's one of the many pearls in a production full of them, perhaps less known than others because it belongs to his second phase, to the Lieder he wrote between 1849 and 1853. Some time ago we listened to two lieder from the beginning of this phase, In der Nacht and Frühlingslied, and we talked a little about the circumstances surrounding the composer's life at that time: how his poor health forced him to leave Leipzig in 1844 and live in a more peaceful city like Dresden; how the outbreak of the revolution in 1849 affected him and how Lied became, again as in 1840, his refuge.

Schumann wrote the cycle Sechs Gedichte und Requiem, op. 90 between 1st and 5th August 1850, the last month of his stay in Dresden; the Schumanns moved to Düsseldorf in September. I don't know for sure if Schumann wrote those songs with poems by Nikolaus Lenau because he had already heard about the poet’s death or he knew it while writing them; in any case, a Requiem was added to those six songs was in his memory. Lenau, however, was still alive; he was probably seriously ill because he died a few days later, precisely on the day that the songs on his poems were played for the first time at Schumann's home.

Nikolaus Lenau was born in 1802; He studied law and medicine. However, he received an inheritance which allowed him to let aside his career and devote him entirely to poetry. He lived for some time in the United States but the experience was disappointing and he returned to Europe; It seems that his mental health was fragile and, at forty-two years old, he suffered a craziness attack that forced him to stay in a sanatorium until his death. Schumann knew that circumstance and felt deeply distressed. He terribly feared for him to end up in a sanatorium too. Unfortunately, as we know, his fears were fulfilled a few years later.

In this cycle of six songs that Schumann wrote with poems of Lenau (the Requiem is an anonymous work, a lament of Heloise about Abelard), the most famous song, often performed isolatedly, is Meine Rose. It comes to no surprise that it's a gorgeous song. The poem has two stanzas; In the first one the poet addresses to a rose that withers because of the strong sun, he waters it to revive it. In the second stanza, he addresses to his beloved, that withers because of the suffering. Schumann reinforces the parallels between the wilting rose and the beloved by repeating the first stanza; The second time is indicated at the score to be sang "pianissimo". With its intimate singing and an accompaniment that reminds of Chopin, this Lied is as delicate as a rose.

I hope you enjoy, as much as me, the version I chose to share with you: Christian Gerhaher and Gerold Huber.

To the lovely jewelry of Spring,
to the rose, my delight,
that is already bowing and turning pale
from the hot beams of the sun,
I reach out a cup of water
from a deep well.

You rose of my heart!
From the silent beam of pain
you bow and turn pale;
At your feet, I would like,
as this flower water does,
to silently pour my soul out,
even if I then might not see
you rise.