G is for Goethe 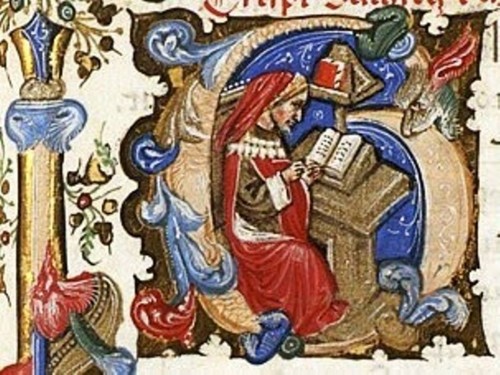 Initial letter G (northern Italy during the early 1400s)
During nearly five years of weekly posts, I have published around forty of them with poems by Goethe. That is, almost a whole year with his verses. These forty songs are composed by eleven different composers, and half of them are from the apple of my eyes (that's to say, Schubert), among them, pearls as Geheimes or Rastlose Liebe. I also dedicated a long series to the songs included in Wilhelm Meister's Apprenticeship, so it's no wonder that the G of Liederabend's alphabet is for Goethe... This letter was one of the easiest.

The intensive presence of Goethe in Liederabend is only a reflection of his importance in the history of Lied: the poet with more different poems set to music, with more songs composed from his poems, the author of the poem with more versions... If I wanted to avoid him (and I don't), it wouldn't be easy! In addition to "lend" his poems to composers, Goethe was one of the theorists of Lied; his theories on how songs composed from poems should be were very influent and he was often fully aware of those songs written from his poems (and he often complained about them). I’ve just realised that I've hardly talked about this matter, It’s already jotted it down in my blog notebook for a next time.

When I posted F is for Fischer-Dieskau, I told you it was a double dedication: to the great baritone and to those singers "in the old days" whose recordings I fell in love with. Most of the proper nouns in my alphabet will also be representatives of others, and, of course, Goethe is the representative of poets. I'm afraid he wouldn't be that happy with my list, but one of the greatest things of Art Song is that even insignificant poems can become great songs, and, that way, great and not-so-great poets can go together hand in hand.

Yes, the list of poets is uneven. It includes, for example, Shakespeare, to whom I'll always be grateful (among other things) for having inspired An Silvia to Schubert; it works wonders with self-esteem. There is also short-lived Felix Schumann, how gorgeous is the song that his godfather Brahms composed from his poem! Another great poet, Walt Whitman, who probably didn't imagine that Oh you whom I often and silently come would turn into thirty seconds of magical music. A woman, Mathilde Wesendonck, to whom we owe a great Wagner's cycle. Wilhelm Müller, who wished that someone musicalized his poems and never knew he was the co-author of two masterpieces. A doctor, Justinus Kerner, gives his name to one of my favourite cycles; from Eichendorff, I just realised, we’ve listened to only three songs of his, how is that possible? And my dearest Rückert and Heine, both follow Goethe in the ranking of poets...

There is no song without a poem, and here we are some pieces of prose that refute this assertion: one of them from Colette and the other is... a recipe. Only the great Bernstein could find the texts for a song cycle in a cookery book, La bonne cuisine française, by Émile Dumont. Bernstein, who wrote the lyrics of the cycle I hate music, like Mahler and Mussorgsky had written before Lieder eines fahrenden Gesellen and The nursery; sometimes, composers figure they're poets. You see, very different poems (or pieces of prose) that became songs.

Among the many musicalized Goethe's poems there is one that has more than fifty versions, as I told you when I talked about it. It's the poem that begins with the words Über alle Gipfeln ist Ruh, that Goethe wrote on the wall of a hut when he was thirty-one and found again fifty years later. Please read the story if you didn't back then; sometimes I joke with Goethe's solemnity, but this story is really touching. We previously heard Schubert's version of the poem, Wandrerers Nachtlied II, and today we're listening to Schumann's, Nachtlied, op. 96/1, another great song. The performers are Christine Schäffer and Graham Johnson..
Nachtlied
Über allen Gipfeln
ist Ruh,
in allen Wipfeln
spürest du
kaum einen Hauch;
die Vögelein schweigen im Walde,
warte nur, balde
ruhest du auch!
Over all the peaks
it is peaceful,
in all the treetops
you feel
hardly a breath of wind;
the little birds are silent in the forest
only wait - soon
you will rest as well.