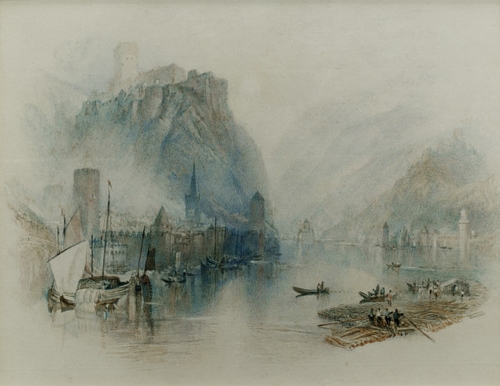 [Burgen am Rhein - W. Turner
We were taught at school that the Rhine is one of the longest rivers in Europe, from the Alps to the North Sea; that during the Roman Empire it became of the most important trade routes; that it constitutes some country borders and passes through this and that country; my ability to forget maps is only comparable to my ability to forget dynasties and their dates. However, we weren't taught (I would remember it) that it became a symbol of Romanticism. All requierements were met: its mountains, valleys, gorges, forests and fog brought up that true and inaccessible nature so desired. Castles in ruins evoked the past, that time of medieval heroes. There were legends bound to specific places, such as those of the Loreley or the Hostile Brothers. In short, the Rhine, especially what is known as Mittelrhein, about 600 km between Bingen and Bonn, represented the world idealized by Romanticism and was often part of the works of novelists, poets, painters and musicians.

In fact, the first to "discover" the Rhine were English people (there arrived from their travels through Italy) because it also had all the elements found in a Gothic novel; the first one, The Castle of Otranto, was published in 1764 and the traveler and collector William Beckford spoke of his admiration for the river landscape in 1783. Then others arrive, for example, Lord Byron and his Childe Harold's Pilgrimage, Mary Shelley and her Frankenstein and William Turner and paintings like the one illustrating this post. Among the Germans, everything started with August and Friedrich Schlegel in 1803 and then came Goethe, Eichendorff, Hölderlin, Kleist, Brentano, Heine... And as you can imagine, composers arrived after these poets.
Apart from Wagner's quite impressive tribute to the Rhine, the best-known appearance of the river in a musical piece is due to Schumann and Heine; it's Im Rhein, im heiligen Strome, the sixth song from Dichterliebe, that we will hear next season; you know it's the only cycle we follow in order and we shouldn't break our discipline now. Today, we're listening to another song related to the Rhine, Berg' und Burgen shau'en herunter, that will be of use to talk about one of the most famous, gorgeous cycles of Schumann, that I haven't yet been able to introduce, in our more than five years together. Unforgivable.

I've talked many times about 1840, Schumann's Liederjahr, and about how suddenly he felt the need to write songs. This rush began in February, with this cycle, the Liederkreis, op. 24. As soon as it was finished he sent it to his publisher, even before than to Clara; This song cycle became his first edited work for voice. For his first "official" songs (he had written a handful a few years earlier), he chose poems by Heinrich Heine, from the Buch der Lieder, the same book that he used a few months later for Dichterliebe and other works. In this case, the nine poems are taken from Junge Leiden, the first book of the collection, and mainly talk of absences and waitings. It's easy to relate this issues to Schumann, separated from Clara by imposition of his future father in law, Mr Wieck, but we shouldn't see the parallelism in every song (we don't have any reason to imagine the composer being angry to Clara, as was the poet to his cousin Amalia) nor shouldn't take literally every word without considering Heine's irony.

Berg 'und Burgen schau'n herunter is the seventh song from the Liederkreis. The poet is tired of waiting for his beloved and has decided to leave; in this song, we share his journey through the Rhine (Heine was born in Düsseldorf, so for him, the river was part of his landscape, beyond cultural context). It's a pleasant trip on a sunny day, everything is perfect, except that the poet compares the gleaming surface of the river and the darkness and death in the deep water with the sweet smile of his beloved and the malice in her heart. Schumann composed a strophic song (the first three stanzas are pure strophic, the last is slightly different) where the voice sings a barcarolle. Schumann knew well Schubert's lieder, I don't know if he thought of Auf dem Wasser zu singen, while writing his song, it's also a boat trip with a similar rhythm. Schumann's melody, that reminds us a lullaby, doesn't reveal any conflict, only the harmony of the scene. The piano accompaniment is more restless, even at the two first stanzas purely descriptive. It is as if Schumann had decided that the voice would show us the still surface and the sweet smile whereas the piano would evoke the danger of the river and the malice of the heart. Or that's how I understand it.

It's a beautiful song, the whole cycle is great. If you don't know it, it's a good opportunity to do so; if you already know it, how long has it been since you heard it for the last time? I suggest a recent recording that I like very much, with Florian Boesch and Malcolm Martineau...
Berg' und Burgen schau'n herunter

Mountains and castles gaze down
into the mirror-bright Rhine,
and my little boat sails merrilly,
the sunshine glistening around it.

Calmly I watch the play
of golden, ruffled waves surging;
silently feelings awaken in me
that I have kept deep in my heart.

With friendly greetings and promises,
the river's splendor beckons;
but I know it - gleaming above
it conceals within itself Death and Night.

Above, pleasure; at heart, malice;
O river, you are the very image of my beloved!
She can nod with just as much friendliness,
also smiling so devotedly and gently.